History of the barrel organ

An early document describing an organ with a pin roller is in the Papal Church Museum; it was written by the German Jesuit priest Athanasius Kircher. His authorship, however, has not been clarified.

Since the beginning of the 18th century, the barrel organ has been known in all European countries as an instrument of street musicians and jugglers, but also - especially in England and France - as a church and salon instrument. Balladeers also used a barrel organ. Many barrel organ players place a plush monkey by their instrument. This is said to be reminiscent of the time when itinerant musicians were often accompanied by a capuchin or rhesus monkey. The monkey was an added attraction - especially for the children - and usually had the task of collecting coins from the bystanders.

The barrel organs were initially built by organ workshops, but later manufactories emerged that catered only to the little sisters of the church musical instrument.

A variant of the barrel organ was the Greek laterna, which was played by yiftoi (Roma musicians) in the 19th century and until the beginning of the 20th century. The yiftoi beat the frame drum with jingle ring daira for accompaniment. The solo entertainers with laterna performed especially in the port cities of the Levant in market places, sometimes accompanied by a wife or daughter who acted as a dancer, or they carried a dancing bear.

In France, the musical instrument is called Orgue de Barbarie, which is attributed to the first known manufacturer: the Italian Giovanni Barberi from Modena first demonstrated this small transportable organ in 1702. 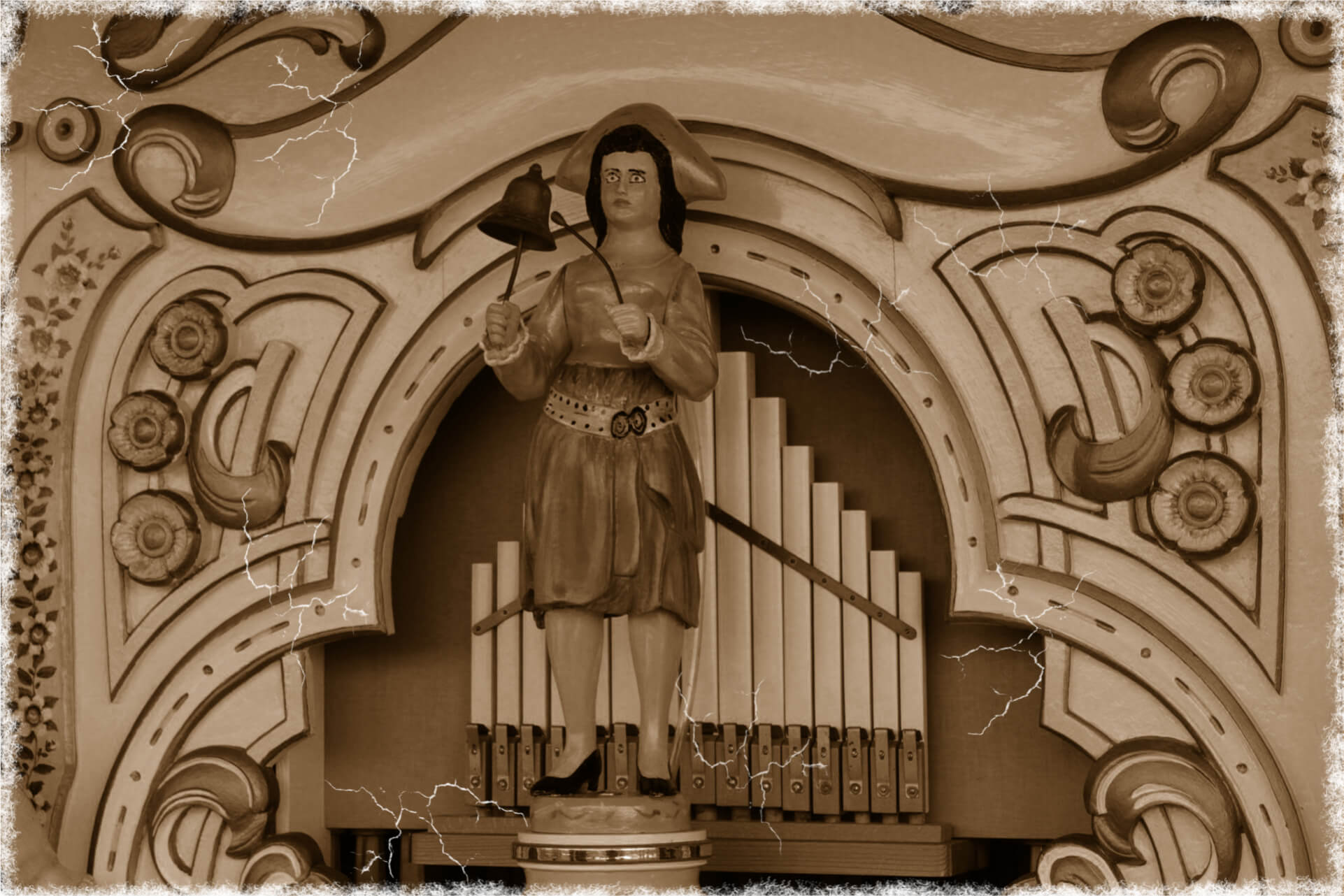 The construction of the barrel organ corresponds in principle to a stationary pipe organ. It consists of a case in which the pipework, the bellows, the wind chest and the playing mechanism are housed. With the help of a crank or a flywheel, a connecting rod operates the leather-covered bellows, which produces the wind. The wind is stored in a magazine bellows, calmed and brought to a constant pressure by spring power. Water power was also occasionally used to drive larger barrel organs (e.g. Hellbrunn Palace, Villa d'Este and Wilhelmshöhe Water Organ).

Above the wind chest, which contains a multitude of valves, is the pipework. Each valve is assigned a tone (one pipe or several pipes of different types). The number of notes can vary in barrel organs (from about 12 to 45). These valves are controlled by the playing mechanism. This can be pneumatic, mechanical or electromagnetic. The pipes are similar to those of a church organ. The rotary movement of the crank also moves the programme carrier in the case of mechanical/pneumatic control.

In contrast to a manually playable organ, a programme carrier takes over the control of the notes; this is located in the playing device. The oldest form of programme carrier is the pin roller, which has been known since antiquity. A pin roller (usually replaceable) can contain up to twelve pieces of music (six to eight are common). The running length of the piece of music is limited by the circumference of the roller.

At the beginning of the 20th century, the punched tape and the punched card replaced the pin roller. Since the beginning of the 1980s, electronic controllers, commonly known as microchips, have been increasingly in use. The music tracks are stored in proprietary formats, more recently usually as MIDI files on memory cards. With punched tapes or punched cards (both interchangeable) and electronic controls, the playing time is almost unlimited.

By changing the playing speed, influencing the wind pressure and using different timbres (stops) on larger instruments (see also stops (organ)), it is possible to interpret the music on pneumatically controlled barrel organs.

State of the art for electronic controls is the control of the playback speed of the piece of music by changing the rotation speed. Simpler electronic controls lack this possibility - the playback speed is always the same, regardless of whether the crank is moved slowly or quickly. Electronically controlled barrel organs can be synchronised by radio or by cable. In this case, all organs either play the same notes of the piece of music, or they take over individual parts of a kind of orchestral score. This is decided by the art of the arranger or programmer. Playback does not require any musical skill on the part of the organ arranger.

On the other hand, the synchronous playing of two or more tape-controlled barrel organs of the same type requires practice and skill combined with musicality and a sense of rhythm. For this purpose, identical or appropriately manufactured perforated tapes are available on the market.